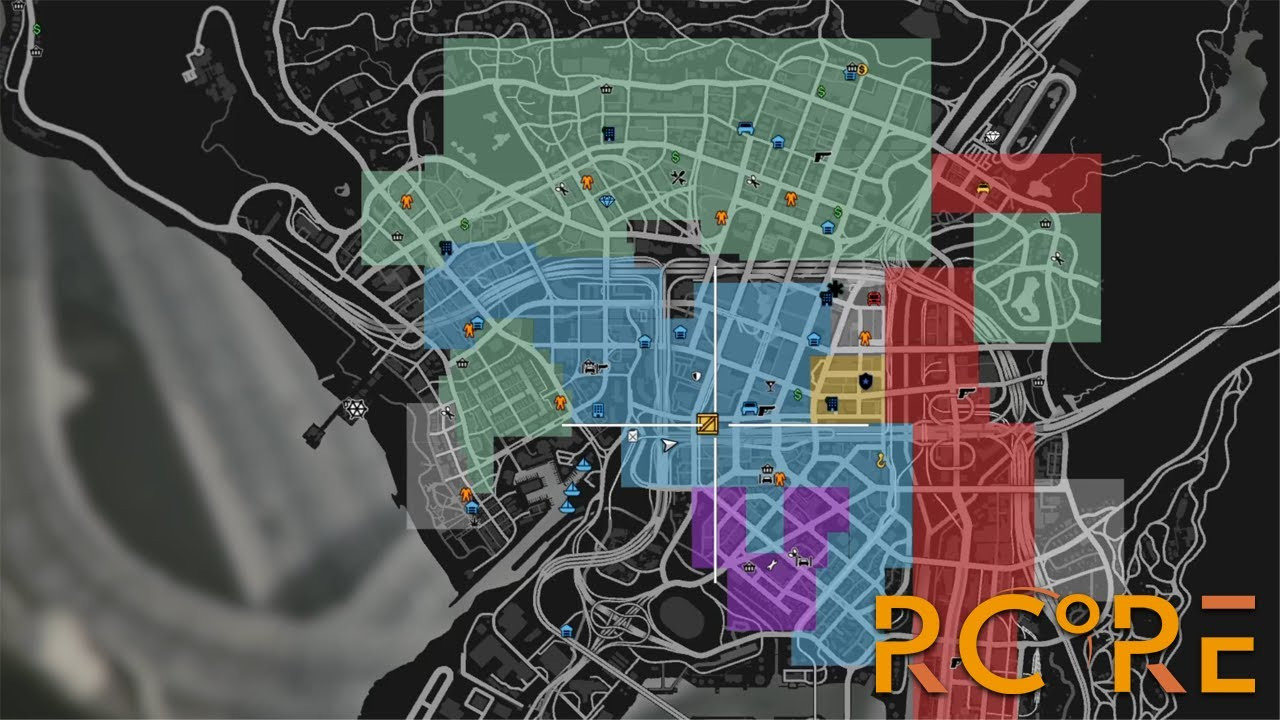 Spray resource does not come with this package
https://store.rcore.cz/package/4519966

Let's have a deeper look! You start your journey by either joining an existing gang or asking admins to create a new one (/creategang). Every gang has its own color, tag and a name.

As a gang member your main concern should be capturing territories and increasing loyalty in territories your gang already owns. There are activities you can do to capture new territories, you can sell drugs to NPCs, spray your gang tag or just be present in that territory for some time. Not to mention you can easily add your own activities!

But don't think you can start to be lazy once you capture a territory! If your gang owns a part of territory your loyalty there will decay over time. Being the strongest gang in a territory has its responsibilities. Someone removes your tag or perhaps sprays their own tag in your territory? Your loyalty will decrease! Same goes if someone kills a resident or robs a business in your territory! Don't get scared, it has its advantages as well!

One being the ability to collect protection money from businesses! But be careful, all territories you own will be colored in your gang color on the map! That can attract attention of other gangs and someone might start a rivalry in one of your territories. Rivalry is an addition to turf war between two gangs, you can start one in a territory that's not yours. A minimum amount of funds will have to be deposited. Once a rivalry starts, for the next 2 days you'll have to start selling as many drugs as you can for only half the price. But at the end, the gang which has sold the most drugs will take all the drug money that's been collected in that time period.

As a gang leader you can place storage and garage checkpoints. The storage serves as a shared inventory for you and your gang members. The garage let's you to add vehicles with custom colors which all your members then can take for a spin!

To own a territory, your gang must have the most loyalty in a zone. You gain loyalty by spending time there (40 every 30 minutes, but to get another 40 points, you must not be there for 30 minutes - prevents afk farming), selling drugs (20/sell) or spraying on walls (80/spray).

The more drugs you sell within an hour, the less loyalty and money you gain. So you should not just sell 100 drugs at a time, rather sell 20 every hour for 5 hours to maximise efficacy. You can only place 6 sprays every 6 hours and every additional spray within 6 hours reduces loyalty gained.

These mechanics ensure that turf wars take days or weeks to come to an end. And trust me, it's very satisfying chipping at another gang's loyalty for days to eventually capture their territroy.

You walk up to an NPC and offer them drugs. They either accept, decline or call police. The more drugs you sell in an hour, the more likely they are to decline or call cops. You also get less money the more you sell, making it more beneficial to sell smaller amounts over longer period of time.

Any player can only sell to an NPC once. After that they will decline until the NPC despawns.

Rivalries take turf wars up a notch. When you want to capture a territory, you can initiate a rivalry that will take 48 hours. During that time, both gangs (attacking and defending) only get 50% profits from drugs sold, the other half is deposited to a shared pool. The gang that sells most drugs within the 2 days will be rewarded with the deposited money.

This way you not only get a shot at stealing a territory but you are robbing the other gang at the same time! The other gang has to decide - do we have enough drugs to defend this territory, or do we just let it go?

Rivalries are annonymous, so the defending gang doesn't even know who's attacking (but they can see %loyalty of other gangs)

When you gain loyalty, neighboring zones gain a small portion of the loyalty, too. This ensures that no gang can ever be "out of one's way" and suspisions can arise. Beerpong is the best way to chill out in Los Santos. Great fit for parties, clubs, or just a little break from the business, intrigue & violence of GTA. Play alone or with a group of friends. Play for fun or profit. Drink beer. Allows you to spray graffiti anywhere around Los Santos. You can spray both text or images, both of which you can add. Gun Range allows you to practice your shooting. You can bring your own weapon or rent one.